by Anthony Ritchie, for narrator, viola and piano, Opus 216

A collaborative work for poet, viola and piano on the theme of Aotearoa/New Zealand's past, present and future.

Taioro ki te Ao was commissioned by Donald Maurice and the group Taioro for a premiere performance in the National Gallery in Ottawa May 30, 2022, under the auspices of the New Zealand High Commission. It was also performed on June 2 at the 47th International Viola Congress, at Columbus State University, Georgia. Taioro is comprised of the word poet Sharn Maree Cassidy ( Ngāpuhi, Te Whānau ā Apanui ) who wrote the texts, along with violist Donald Maurice and pianist Sherry Grant.

The title Taioro ki te Ao means a balance of darkness and light. Sharn's texts and poems tell of colonisation and indigenous challenges in Aotearoa/New Zealand, from the perspective of a wahine, a Māori woman. It delves into past mythology and history, but also considers the present and future through a post-colonial lense.

The music reflects on the words and endeavours to release emotions related to the various themes that emerge in the texts. The work is divided into four parts:
Part 1 - I nga o mua. Rangi/Papa. Hineahuone. Matariki. The Great Voyage.
Part 2 - Colonial settler arrival.
Part 3 - Colonisation.
Part 4 - Current times.
Each part contains several poems and texts, interspersed with music. Occasionally, there is overlap between the speaking and the music. The relationship between text and music is outlined in the score, and in the collection of texts.

The NZ High Commission in Canada has the first performance available for streaming from its facebook page. The Taioro performance starts at around 33 minutes. 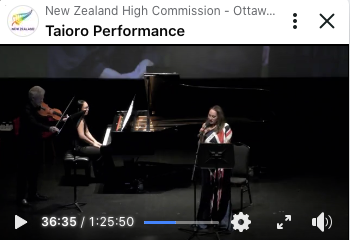